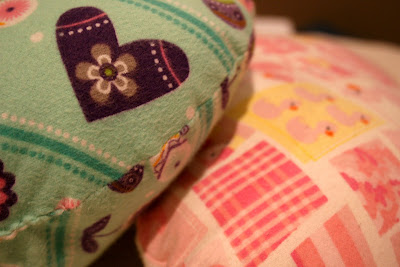 Here are two of our newest home accessories-the thousand dollar pillows!* Well, sort of. We got these two adorable pillows at Texas Children's Hospital. My daughter Em and I have been spending of time at TCH lately. We've been trying to get answers to Em's "concerning" and unknown illness. For the past month or so, Em has had several episodes (the best way to describe them is near fainting), always around the same time but with slightly different circumstances. Due to her young age and the frequency of the occurrences, we've gone through a lot of testing and a great deal of worry. We don't know very much right now, except that we'll meet our deductible for her insurance this year! Yea! And, we have two lovely pillow from the Pediatric Cardiac Department to remind us of that. So far, the tests haven't given us a diagnosis.

We try to be pretty laid-back parents. But, when doctors order tests for your 5 year old daughter that involve EKGs, EEGs,and cardiac monitors, well, that is just a little too much. Fortunately, she's been pretty brave about everything. But today, she reached her limit of poking and prodding. And, I don't blame her one bit. I haven't blogged about it before now because we didn't know anything. Although, if you follow me on Twitter, I've been tweeting about it. It was time to get it out there. I needed to write about it to take the weight off my shoulders. To say I've been off-balance lately is putting it lightly.
Em's Diagnosis Unknown is the reason I am not now posting about completing my first half marathon. I couldn't leave her in Texas with a babysitter while we went to California. Of course, she hasn't had an episode since we decided to stay behind. It was an easy decision for me as a mom, but I'm still really conflicted about leaving my friends in the lurch and feel like I have left an important goal unattained. That said, I had to stay. I need to know what is going on with my kid. So much goes through your mind when you realize that something is wrong with your baby and that something is unknown. My mind went to the worst cases and the best cases all in the span of a day. For now, we wait. For now, we stay. We are fortunate to live in Houston with the best medical resources available. Somebody will figure this thing out soon, I'm counting on it. Until then, we have these two lovely pillows as a parting gift!
*I used to have a $60 plastic cup-the only thing I got from attending the 1997 Tostitos Fiesta Bowl (38-15 loss to Penn State). It didn't really cost $60, but since the ticket was a total waste, I count it.