Today was my last day at work. I was feeling conflicted- extremely happy for new opportunities and a fantastic new job, but really sad to leave good friends and familiar surroundings. So, I decided a little retail therapy was in order. I decided to stop in at BHLDN, which is full of SO MUCH pretty. Honestly, I want to have a vow renewal or big bash just to wear some of their fabulous stuff. In addition to amazing dresses and shoes, I couldn't stop looking at their jewelry pieces. They have a ton of great vintage pieces. You know I love vintage. I've been looking for a few sparkly bangles, and thought this one fit the bill. 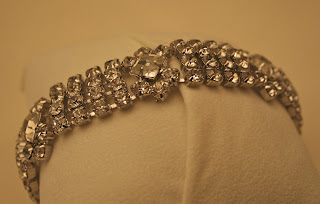 It's in perfect shape and is priced competitively to what you would find on etsy. Plus, BHLDN (and Anthropologie) both participate in the Houston Holiday Shopping card, so it was 20% off (under $50). Score. Pretty Sparkly Score. If you are in Houston, I suggest a trip to BHLDN to shop for some pretty sparkly pieces. Don't forget to use the Holiday Shopping Card.

I'd like to know if teachers assign home projects just to mess with parents. We are on the 4th project of the school year. It is really an enjoyable way to spend each evening and part of the weekend. Oy. If you have an elementary aged kid, stock up on posterboard and glue sticks.

Not to bury the lead or anything- but I GOT A NEW JOB. I have one week left at my current job and then get to take some time off before starting a great new job. I knew I was stressed out, but didn't realize how incredibly stressed out I was until I got a new job. Holy smokes. (Hi, Jessica if you're reading. I will miss you!)

Also, I am firmly on the jeans and a blazer every day to work train. No client meetings + less than a week left = jeans. Ha.

I'm so excited about starting on a long list of "never have times"- like furniture rehab, a l-o-n-g list of projects, ironing, going through photo albums, cleaning closets, watching movies, working out whenever I want to, going for long runs during the day. I can NOT wait.

I went running this weekend and managed to not break, strain, or sprain anything. I view that as a major accomplishment. Thank you KT Tape.

This weekend, I achieved a parenting feat we all look forward to- I was the "best mommy ever" and it was M's "favorite day ever" on Saturday. By Sunday I became the "meanest mommy ever." M is prone to exaggeration.

Sunday I rediscovered the real reason we Catholics have wine at Mass. No, not the miracle of transubstantiation. It's because you might consider drinking by that point in Mass. Yes, my children were a special kind of embarassing during Mass.
4 comments:

Before I forget (like I did with her Nancy Drew party last year), I figured I should document my daughter's Harry Potter 8th birthday party. I have to say that this was one of the most fun themes: 1) because we are big Harry Potter geeks, 2) because the Internet is literally full of thousands of great inspiration parties. It's so easy! The only hard part was deciding what to do since my girls were full of TONS of ideas. 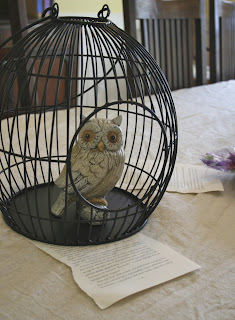 We started in the Owlery. The girls were supposed to make owls by gluing feathers on Styrofoam balls. They ended up just sticking feathers into the balls in weird alien ways. Oh well, at least they seemed to have fun. If I did it over again, I'd plan better and follow this tutorial for felt owls. I even have a ton of felt I could have used-grrr. Crafter/Party Planner's remorse. Sigh. 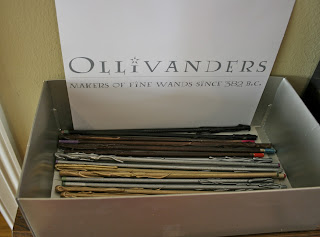 Wand Selection- I made the wands after googling and went for the easiest option. I ended up using dowels (I already had a bunch lying around), dripping hot glue over them, and spray painting with regular spray paint then with some glitter spray paint I had. My mom played the role of McGonagall and gave them wands after the sorting hat ceremony. 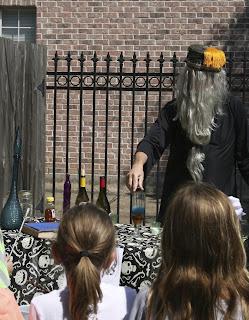 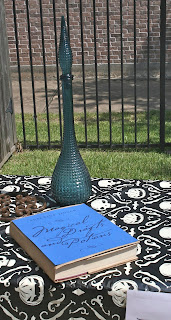 Potions Class- my dad played the role of Dumbledore and he was excellent. I wish I prepared more experiments for the girls/wizards. I really liked the experiments from this party and used two of them. My dad showed the young wizards Liquid Enemies (above) and then everyone made Exploding Elixir. It was a big hit. 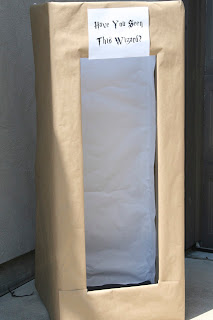 While the girls were working on their potions, I took pictures of each girl in the Harry Potter Photo Booth I made inspired by this Sirius Black photo prop. I repurposed the Barbie photo booth- I knew that huge box would come in handy. 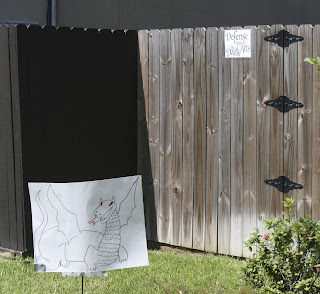 Defense Against the Dark Arts- I drew a bunch of evil monsters, trolls, etc, and had Hagrid (my husband) equip each wizard with a fighting potion (silly string) and they just went crazy. Silly String is part of each of our parties now; I have to find a way to work it in. The girls love the Silly String fights. It was funny to see my husband running around with a giant Hagrid mask, trying to see where he was going. 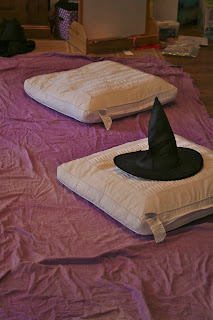 Divination- we gave the girls color changing drinks to tell their future. I think the colors we used were: Blue for Loyal Friend, Green for Fame, Yellow for Smart and Hard-Working, and Red for Love. I was most excited that I could use my horrible Craft Fail as part of the decoration in this room. 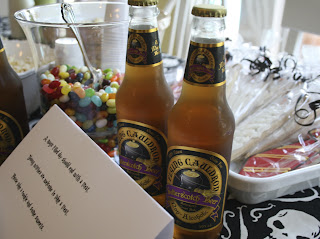 Of course, we ended with a trip to Honeyduke's sweet shop. The girls got to try Bertie Botts Every Flavor Jelly Beans (yes, that even included flavors like dirt and vomit) and Butter Beer. I found the jelly beans and butter beer at a local candy store-they just got them in that week. thank goodness for a late September birthday! Note- I bought a couple Bertie Botts and mixed them with Bamboozled jelly beans to save on costs and little tummies. 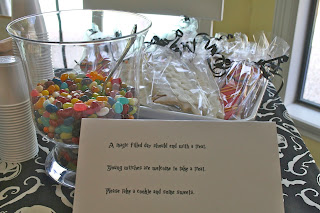 In case you are wondering, our goody bags included the "owls" they created, flower pot and plant, wand, candy and a Harry Potter themed cookie.
3 comments: 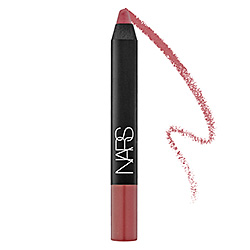 
I'd been looking for a lip pencil for some time. I love NARS lip colors, so I picked this up during a wekend tour around Sephora. Love it. It's smooth and lovely and a great color. I like it on its own, but also works well as a base coat. So good that I bought another color (Never Say Never and Damned). You should too, and then maybe send me one of the colors I don't have.

Email ThisBlogThis!Share to TwitterShare to FacebookShare to Pinterest
Labels: My Favorite Things

My husband had been gone for about a week. When he said, "What's next on your wish list shopping list? You should go ahead and buy it now." It means that he has a hunting trip planned for this week and feels sort of bad about it.

I got 2 bouquest of flowers Sunday. This is 2 more bouquets than I've gotten probably all year. My husband usually thinks, "If you want flowers, you should buy them." So romantic. Apparently all I had to do was watch the Longhorns lose a football game in the last 5:25. Espinosa and Fera, I'm looking at you.

We had a little bit of a weather change this week-meaning we had Fall temps for one day this week! While looking in the girls' closet, I found outfits I bought last year on super sale to wear this year. I am brilliant!

I went through a ton of the girls' older clothes this weekend and, after some misty eyed moments, am packing the clothes to send them off to lucky friends and relatives who have little girls. I can ruthlessly unload playclothes, but the church clothes and pretty dresses, for some reason those kill me. Cue "Memories" on repeat in my head. Sniff.

I had the hardest time getting motivated to go running this weekend. I have three 1/2 marathons planned over the next few months, so I HAD to go. I ended up breaking my bu-- (technical term) while running and it really hurts. Also, it is really embarassing. I knew I should have stayed home.

My 8 year old has somehow transformed into an 18 year old overnight. I do not like this-I want my babies back! Sniff.
1 comment:

Harry Potter Party Decor- Part 1
I guess was more exhausted after the Harry Potter party than I thought. I just moved a few things around to decorate for Halloween and called it a day! If you have a Harry Potter party, I highly recommend hosting it right before Halloween-easy peasy. 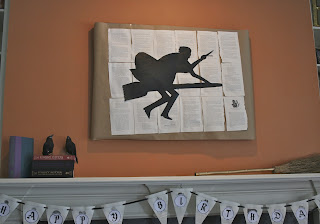 Here's the mantel for the party- I made the Harry Potter silhouette and pasted pages from a Harry Potter book behind it, the Harry Potter books on the left are all from Half Price-which is why I didn't mind cutting one up for decor. I made the Happy Birthday banner out of pages, my daughter's name underneath was done in the front covers. I love making banners, they generally go pretty quickly and make a nice statement. It turned out so cute (not pictured since it has her name on it!). The broom is a Nimbus 2000, of course-or just a cheapo broom from a craft store spray-painted gold, same thing. 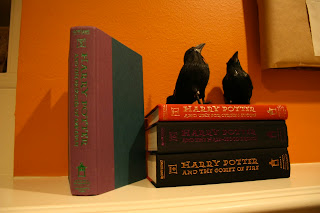 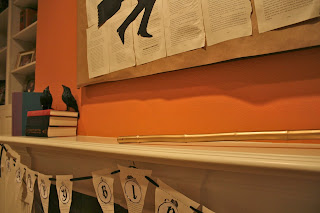 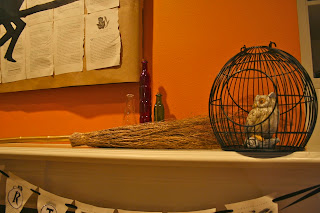 After the party, I moved the owl and potions bottles over. Voila-done! Sharing with TenJune's Fall Party.
2 comments: