Today's my birthday! Woo. Two years closer to the big 4-0. I'm OK with it because that's two years closer to a big trip we'll take to celebrate my new decade. I started the day with an armful of awesome handmade cards and books and art from my girls-pretty much the best gifts ever. I also got awesome birthday shoes. These.

They are awesome. Professional, but with a touch of fun. The story of how I got them is pretty fun(ny) too.

A few weeks ago we spent the weekend at our Property. The girls and I were inside playing games and relaxing after a long day of exploring. My husband decided to head outside and (surprise-surprise) try to do a little hunting. He headed out to the blind to wait for a turkey. Our property has TONS of turkeys. Did you know turkeys roost in trees at night? Totally crazy to see. Anyhow, I was scooting around the internet in between turns and decided to check out the Kate Spade Friends & Family Sale. A few minutes later and I saw the shoes. I feel in love. A new neutral. LOVE. I didn't want them to sell out of my size, so I used our walkie talkie.


"Hey, babe, have you bought my birthday present yet?"*
No
"Can I buy it?"
Come again?
"Well, there's this pair of shoes and I really like them and they are only on sale tonight and Ireallyreallyreallylike them..."
Fine.
"Great."
Can you get off the walkie talkies? I'm trying to hunt.
"Love you."
Roger.

*NB- We had just discussed the fact that I had nothing on my birthday list because what I wanted ended up being ridiculously priced. Like ridiculously ridiculous. What can I say? I have great taste?!

Postscript- No, he didn't get a turkey. Not due to the walkie talkie discussion...I don't think.

I'm not a Runner, but I do run. I was watching updates from the Boston Marathon today, hoping Shalene Flanagan or Allyson Felix would win while reading updates on the Supreme Court case on genetic patents (I'm a dork). Yes, I was also working-I can multitask like a Boss. I was stunned to hear of the bombings at the Boston marathon. So stunned I couldn't think of anything else after hearing about it. Just like in December... I started thinking of those people, so excited to make it into the Boston marathon, training for that moment. I pictured their friends and families coming to support them...and, then I thought of my own little cheering squad and how much easier they make my race days. I thanked God that we never meet at the Finish line. Then wondered, is that enough anymore? Is anything enough anymore? Terror in the schools, in movie theaters, at a race. This is crazy. Absolutely crazy. I'm stunned and out of words. 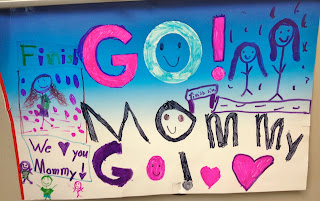 I don't know if I should throw myself into running to show that I am not afraid. But, I am. Around New Year's Day, I read this personality test type of article where you plug in certain facts about yourself and it tells you your resolution for the year. Mine was to give up running. At the time I was already scheduled to run 2 half marathons in 2 months and I scoffed aloud. Of course I wasn't going to give up running this year! Now it seems like a good option. I won't, of course. I know the likelihood of anything like this happening again at a race is remote-there will be new security measures. But, it feels like running (for me) has been tarnished. I ran races because it was a fun way to set and reach goals. I just don't know what I want out of it now.

I guess I'm just trying to figure out what course to take. Until then, I will add those affected by today's bombings in Boston to my thoughts & prayers and hope that sending good karma can somehow help.

Edited to add: This story of the Tough Ruck team made my heart swell. There is, after all, more goodness than evil.
1 comment: